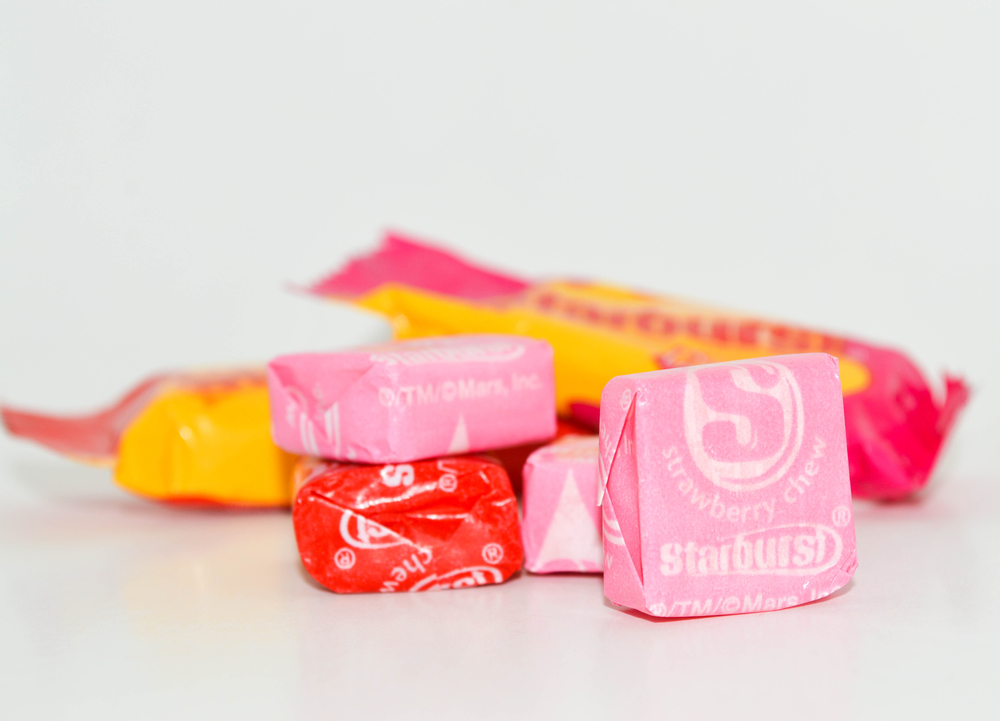 A candy reminiscent of childhood for most 90s kids, Starburst is an all-American treat. These square-shaped, fruity chews are enjoyed by many, but for those seeking plant-based, vegan, or vegetarian options, Starburst is a gray area. We’re here to shed some light: is Starburst vegan?

Starburst is not vegan. This is because Starburst contains gelatin which is derived from cows or pigs. This ingredient is commonly used to create that gummy, chewy texture of candy. Not only is Starburst not vegan, it also contains high amounts of sugar and saturated fat. The best healthier vegan alternative to Starburst is Smart Sweet Smart Chews.

In this article, we will discuss the nutritional information of Starburst and why it isn’t healthy. We will then highlight healthier and vegan alternatives to Starburst. Let’s dig in!

The American Heart Association recommends no more than 25 grams of added sugars a day for women (6 teaspoons) and no more than 38 grams for men (9 teaspoons).

With 22 grams of sugar per 8-piece serving, Starburst candy contains 88% of the recommended daily intake of added sugars for women and 58% for men. That is if we stick with the serving size of only 8 pieces.

The 2015-2020 Dietary Guidelines for Americans recommends limiting saturated fats to no more than 20% of our total calories per day. This means if someone consumes 2000 calories a day, roughly 200 calories or less should come from saturated fats.

With minimal to no vitamins and minerals present and high amounts of sugar and saturated fats, Starburst are a treat encouraged in moderation only.

When reaching for candy, most of us know we aren’t going to be grabbing for something super nutritious. Often candy is loaded with added sugars, oils and other fats and Starburst are no exception.

A serving size of these fruity candies is about 8 chews. Each serving is about 160 calories, 3 grams of fat (saturated), 0 grams of protein or fiber and a whopping 22 grams of added sugars.

At 20 calories per tiny square, these sweet treats can add up fast.

Starburst contains a variety of different flavors and products such as Tropical fruit smoothie, Sour, FaveReds, Very Berry, Superfruit, Summer Blast, and Watermelon flavors. The nutrition content of these different varieties does not differ significantly despite the flavor difference.

Although nutrition facts vary for each of these products, generally speaking, they are all very similar in their carbohydrates and added sugar content.

Smart Sweet Sweet Chews are a plant-based alternative to Starburst that are also much lower in sugar. Free of gelatin and sweetened with monk fruit, these fruity treats contain only 3g of total sugar per 120-calorie serving.

They also contain an impressive amount of fiber, at 10g per serving. Compared to most fruit chews that contain little to no fiber, this is an unexpected bonus.

Other Vegan Alternatives to Starburst

For those looking for a vegan alternative to Starburst, consider these options. Remember though, vegan does not always equal healthy. 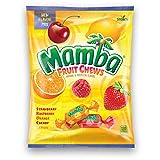 Closest in taste to Starburst but vegan and vegetarian-friendly, Mamba fruit chews are a great alternative. Similar shape and individually wrapped, this is arguably the closest to the real thing.

Comparable in shape and texture as well as flavor, Airheads mini taffy bars are another close alternative to Starburst. Similar in sugar content with artificial flavors, these candies may be vegan friendly, but they are not the most nutritious option out there. 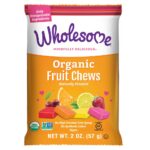 For those looking for a vegan candy similar to Starburst but on the healthier side, consider Wholesome Organic fruit chews. Certified organic, vegan, and gluten-free with no artificial colors, these fruit chews will satisfy that sweet craving.

These nautical themed gummies are a delightful alternative to Starburst that are not only vegan friendly but are also gluten-free.

However, aside from being free of animal products and gluten, they are not much of a nutritional improvement. With 39g of carbohydrates and 27g of sugar per 9-piece serving, these gummies pack a lot of sweet.

Gluten-free, vegan, and free of common allergens, Trujoy Organic fruit chews are another great alternative to Starburst that are on the healthier side. These chews are free of corn syrup and are GMO-free. However, an 8-piece serving size contains 34g of carbohydrates, of which 21g are sugars.

Currently, Starburst candies are gluten-free in the United States. However, the same is not true for all countries. In fact, Starburst candies in Australia and the United Kingdom are not gluten-free. This is because they contain glucose syrup and water thickener that are products of wheat. Always be sure to check the food label to make sure there are no gluten-containing ingredients as changes can be made at any time by the manufacturer.

Are Starburst all the Same Flavor?

Some may argue that Starburst all taste the same but in fact there are different flavors. On the package of standard Starburst, you will find a list of flavors that include cherry, orange, strawberry, and lemon. Starburst also has a variety of flavor options aside from original such as Tropical, Sour, FaveReds, Very Berry and Superfruit flavor.