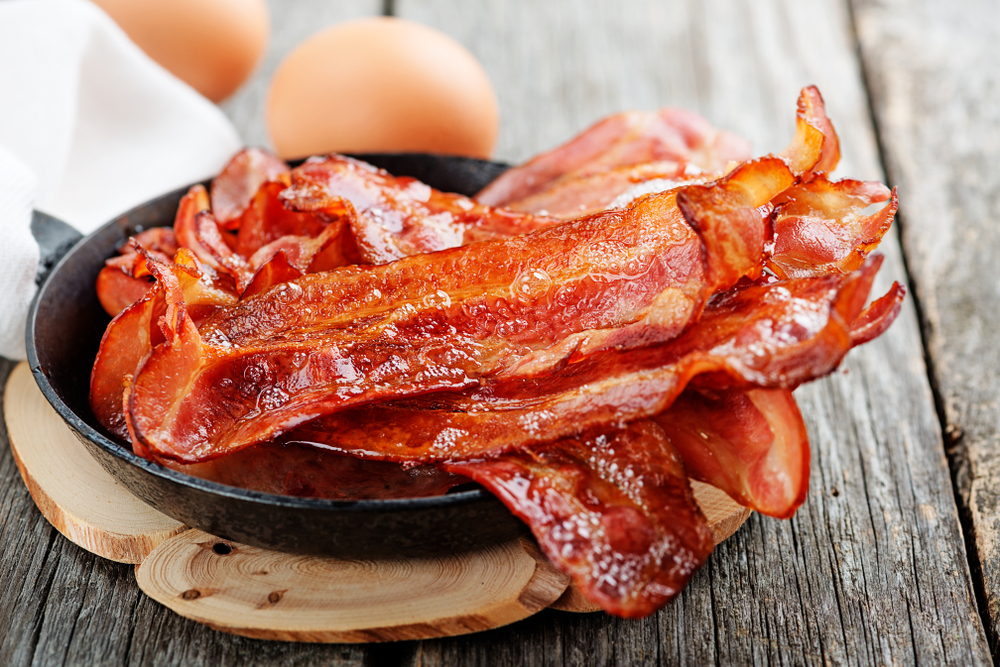 Bacon is one of the most popular breakfast meats. It’s also a popular addition to many other dishes by adding a unique flavor and texture. When you think of a Paleo diet you probably assume that all forms of meat are Paleo-friendly. You shouldn’t be too quick to make that assumption, since not all processed meats are made with natural and/or Paleo-friendly additives.

Most forms of bacon are Paleo-friendly. Some bacon has cane sugar added as a preservative and is avoided by some Paleo dieters. Truly Paleo-friendly bacon is made without refined sugar and is free of preservatives like sodium nitrites. Paleo-friendly alternatives to bacon include Teton Waters Ranch Cooked Uncured Polish Kielbasa Beef Sausage and Mission Meats Sugar-Free Beef Sticks.

Is bacon bad for you? What’s the difference between cured and uncured bacon? We’ll address these questions and more below!

Is bacon bad for you?

Bacon is made from the belly meat of pigs. This meat is high in fat which is part of the allure of bacon. Bacon is high in saturated fat, the type of fat found in animal products.

There has been a lot of controversy over the years about whether or not saturated fat is bad for you. The bottom line is that eating a diet rich in saturated fat may promote higher levels of LDL “bad” cholesterol compared to unsaturated fats found in salmon, nuts, seeds, avocados, and other plant-based foods. High levels of LDL cholesterol along with other factors can increase your risk of heart disease.

Bacon is usually cured with a combination of salt and sodium nitrites to preserve its flavor and inhibit bacterial growth. Curing bacon makes its sodium content higher than uncured bacon which involves less sodium. A high-sodium diet can worsen common health conditions like high blood pressure and kidney disease.

Nitrites are naturally present in some foods like beets, celery, and spinach. Nitrites are also present in your body – we only get around 20% of nitrites through food.

Some studies suggest that nitrites might increase cancer risk, but other studies don’t find any correlation.

Heterocyclic amines (HCAs) are chemicals that form when you cook meat using high-heat methods like pan-frying or grilling over an open flame. Both animal and human studies find a correlation between HCA intake and increased cancer risk.

Bacon usually has sugar added to it to help balance out the sodium content and fight bacterial growth. The amount of added sugar is usually negligible in bacon whether it’s from cane sugar or honey.

How to choose Paleo-friendly bacon

One of the main purposes of the Paleo diet is to eat in a more natural way while avoiding unnecessary additives and preservatives. Choose uncured bacon to avoid additives like sodium nitrites which don’t align with Paleo diet principles. Uncured bacon usually contains celery powder as a natural source of nitrites.

Cane sugar isn’t Paleo because it was made after the Caveman Era. Honey is a Paleo-friendly sweetener and is found in many types of “natural” bacon.

However, the amount of cane sugar in bacon is usually negligible. Most types of bacon with cane sugar have zero grams of sugar per serving, so some Paleo dieters might be willing to eat bacon preserved with such low amounts of cane sugar.

Are other types of bacon healthy?

Turkey bacon isn’t an overly-healthy food, but it does have the benefit of being lower in total fat & saturated fat for those limiting their fat intake.

Most types of plant-based bacon aren’t Paleo-friendly because it contains soy and/or wheat ingredients.

One of the best ways to cook bacon is to bake it in the oven. Baking can help reduce the formation of potentially carcinogenic heterocyclic amines by reducing the likelihood of over-cooking. You’ll also cut down on grease splatter by baking it in the oven versus in a skillet.

Be sure to line your baking dish or baking sheet with parchment paper to help keep it less messy.

Can bacon be cooked in an air fryer?

Regular cut bacon can be cooked in an air-fryer for 7-9 minutes at 350 degrees Fahrenheit depending on how crispy you like it.

Can you cook bacon in the microwave?

You can cook bacon in the microwave faster than other methods. To reduce the mess, sandwich the bacon between layers of paper towels on a plate to absorb the grease. Start with 3-4 minutes of cook time and then cook in 30-second intervals, being careful not to let it get overcooked.

Why does bacon shrink?

Bacon shrivels up when you cook it because it’s losing its water content. If bacon shrinks significantly it could be that it was cured with a high water content or it was especially high in fat (the fat turns to grease when heated).

How to Store Bacon

You can freeze bacon for 6-8 months. Be sure to wrap opened bacon tightly before freezing to reduce freezer burn.

When in doubt, toss bacon once it’s past the sell-by date by even a few days.

Other Paleo Alternatives to Bacon

These keto- and Paleo-friendly beef sticks are free of added sugar, nitrates, and nitrites. It’s made from grass-fed beef and is free of MSG. They’re convenient for on-the-go and travel situations.

Bacon made from meat is naturally gluten-free. Plant-based “bacon” usually contains wheat-based ingredients so aren’t gluten-free. Some brands might add flavorings that contain gluten, so if you choose flavored bacon you should double-check the ingredients label.

Can bacon be eaten raw?

Bacon, like all meat, shouldn’t be eaten raw. While bacon does have additives to reduce bacterial growth, you still run the risk of getting a foodborne illness from eating raw or undercooked meat.

Why does bacon give me heartburn?

Bacon is high in fat which can aggravate symptoms of gastroesophageal reflux (GERD), commonly referred to as heartburn. Avoid high-fat foods like bacon if it worsens your heartburn.

If you do choose to eat bacon and suffer from heartburn, eat it earlier in the day before you lay down to sleep, which can worsen symptoms.

Can you eat bacon while pregnant?