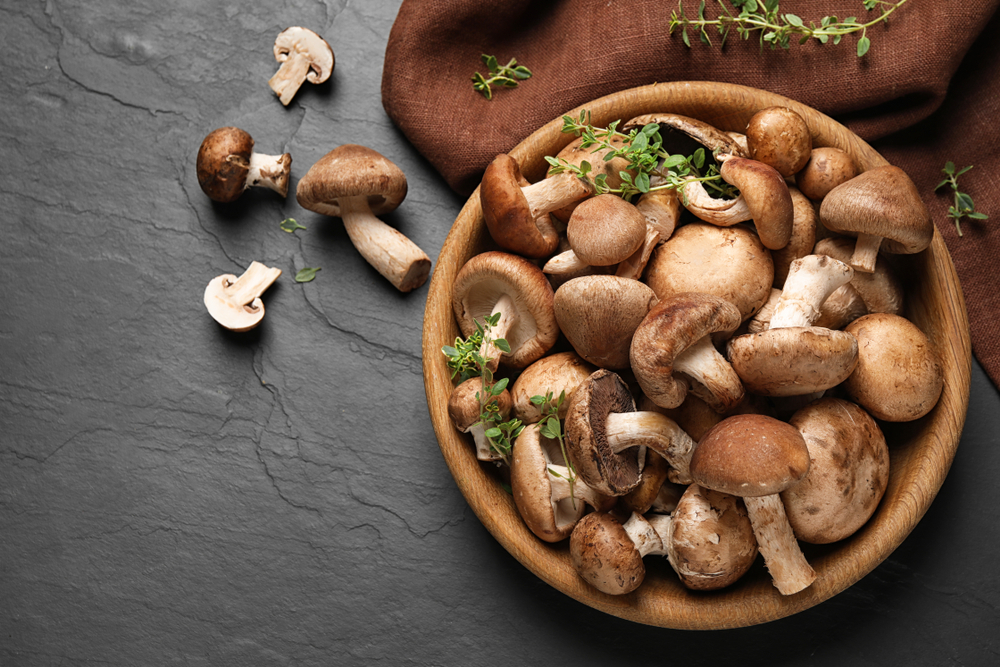 Mushrooms are the reproductive structures that are produced by certain types of fungi. Not unlike the “fruit” of a plant, the seeds produced by the mushroom are microscopic spores, which number in the millions, are found in the “gills” or pores under the mushroom’s cap. A mushroom is in a class by itself. It is neither vegetable nor animal. As a type of fungus, the mushroom is in a kingdom all its own.

Mushrooms are vegan-friendly. Classified in the Fungi kingdom and not the Animalia kingdom, they are considered a “plant” type of species. Vegans can consume mushrooms, as they do not have a CNS, or central nervous system, like animals do, therefore any use of them is not considered to be cruel or exploitative. Other vegan alternatives include tofu and eggplant.

In this article, we’ll take a look at a number of the types of mushrooms, their nutritional value, the various uses for mushrooms, and even some alternatives to this versatile food, if you are just mushroom-adverse.

First, a word about the differences between mushrooms and plants. The main difference is that plants “eat” their food through photosynthesis. They possess chlorophyll in their parts and photosynthesis is how they produce their food. Mushrooms, on the other hand, exist by “eating” the decaying materials in nature.

Mushrooms should not be confused with mildew or any other form of fungi. While they belong to the Fungi kingdom, they are not included within the 144,000 species of mold, yeast or rust.

There are 10 types of common mushrooms.

There are many medicinal and health benefits from mushrooms:

Mushrooms are used in a variety of different ways with cooking and raw dishes:

Mushrooms as a Coffee Substitute

Mushrooms have also become pretty popular as a coffee substitute:

This concept may have taken on a new popularity today, but it dates back to World War II, in Finland, when coffee beans were hard to come by.

The mushrooms most commonly used for coffee are of the medicinal varieties:

These mushrooms are dehydrated, ground up into fine powders and then mixed with high quality ground coffee beans. You then make it the same way you make your regular cup of joe.

Today, manufacturers are using the mushroom for coffee, in addition to coffee beans, hailing the medicinal and health benefits of the little fungus. These mushrooms purportedly reduce anxiety, improve brain function, promote immunity, and treat symptoms of depression.

Some of the more popular brands of mushroom coffee are:

Organic, fair-trade certified, and single origin, the Four Sigmatic mushroom coffee blends help you focus on your work or hobbies without the jitters associated with caffeine.

Keto, vegan, and paleo-friendly, as well as being dairy and gluten-free, the Shrooms brand of mushroom coffee supports your immune system and gut health.

In addition to coffee, mushrooms are also famously known for being a medicinal tea.

Aiding in your response to stress, boosting your immune system and gut health, is mushroom teas. Containing prebiotics for gut health and adaptogens to help stabilize your body during times of stress, here are a couple of the brands of mushroom teas available.

Non-GMO certified, kosher, and certified organic, the Reishi mushroom tea is known for supporting immune health and keeping the body in balance.

Have an aversion to mushrooms? Does the thought of eating fungus make you a little queasy? There are alternative vegetables and other foods you can try which can substitute for this friendly little fungus.

Hailed as the top mushroom alternative, tofu, the compressed soybean paste, won’t taste like a mushroom, but you can add spices which will help create mushroom flavor, like garlic powder and onion powder.

The texture of the eggplant is very similar to that of many mushroom varieties. It has a “springy” quality and when cooked until it’s soft and tender, it can mimic the same result as mushrooms in a dish. Always remove the skin first before you cook it, as the skin has a distinctive flavor, which is definitely not that of a mushroom.

Tempeh is made from soybeans which have been fermented. This has a heartier texture, more so than tofu, so it is more similar to mushrooms. Tempeh can be sliced thinly to resemble a large mushroom for a sandwich, or added to stews and sauces for dishes.

The delectable summer squash, zucchini can be a great alternative to mushrooms, as it has roughly the same texture. Try not to cook it too long when you are making a recipe which calls for mushrooms, as it can get mushy and lose some of its flavor.

Mushrooms are a vegan food. They are not a plant, but they are not part of the animal kingdom, either. As a fungus, they are considered to be a food which vegans can consume. With a wide variety of uses, both in meals and as a raw ingredient, mushrooms are also popular in coffee blends and teas.

Are mushrooms good for you?

With health benefits like regulating cholesterol, providing potassium and other vitamins, and boosting the immune system, mushrooms have a wide range of health and medicinal benefits.

Mushrooms are a paleo-friendly food. They are unprocessed and used from their natural state. They are also high in many nutrients which prevent diseases and, even though they are low in calories, they are actually very filling.

Leslie C. has always been very conscientious about her health and what goes into her body. She takes pride in her physique and commits to exercising multiple times a week to keep her mind and body strong. Nutrition and intentional health choices are not only interests to Leslie, but concentrated ways of life. Leslie is a market and creator, and she also co-owns custom clothing and homemade décor online stores with her husband, which also bring out her creative side in her spare time. Leslie is mom to a husky named Lily and a kitty named Lina, and she lives in Lansing, MI.