A delicious breakfast includes eggs, bacon or sausage, toast, and hash browns.  Potatoes sprinkled in salt and ketchup, they can be shredded or cubes sautéed in oil to a crispy brown.  They can be plain or with onions, spices, meat, or eggs added.

Yes, hash brown potatoes are considered gluten-free. However, it is important to check the ingredients as flour is sometimes used for coating hash browns.  Contaminants from other foods that are processed in the same plant can also add small amounts of gluten.  The best gluten free and healthier alternative is Dr. Praeger’s Sweet Potato Hash Browns.

We are going to explore the origins of hash browns as a popular breakfast food, and then touch on several brands that are gluten-free and compare them to a few that are not.  You’ll be able to decide for yourself which brand works best for your diet and lifestyle.

Maria Parloa was an American food author.  A recipe for hash brown first appears in her 1887 Kitchen Companion book.  Soon after, in the 1890s, hash browns appeared on the breakfast menu of diners in New York City.  Fast forward to the 1980s, McDonald’s and Burger King introduced them to their breakfast menu.

Hash browns are also sometimes called country-fried potatoes.  They can be cubed, shredded, or in patties.  When formed into patties, often a binder is added.  Check that binder to make sure that the potatoes are still gluten-free.

Hash brown potatoes are sold in the refrigerated section of your supermarket, in the frozen foods section, and also as a dry good in dehydrated form.  To ultimately control the ingredients, pick up a bag of potatoes to shred fresh and choose an oil to fry them in.  This way you can control the amount of seasonings and avoid additives and preservatives.

With one ingredient, it can’t get any easier or healthier, even if you shredded potatoes yourself.

Simply Potatoes brand is found in the refrigerated section of your grocery store.  They are designed to be used within several days.  The potato recipe is simple with potatoes and some preservatives added for longer shelf life.

Idahoan products are found in the dry goods section of your grocery store.  They need to be rehydrated before cooking, but once they are they cook up in as little as 10 minutes.  They have a few more ingredients added in their processing preparation.  They are still naturally gluten-free.

Hungry Jack potatoes are also dehydrated.  The package lists them as gluten-free.  BHT is listed as an ingredient, which stands for butylated hydroxytoluene.  It’s used to prevent oxidation (the potatoes turning brown).  The FDA considers this to be “generally recognized as safe” allowing small amounts to be added to foods.  This has been a controversial subject that needs more research.

Ore Ida potato products are found in the frozen food section.  Ore Ida Diced Hash Brown Potatoes have the same ingredients and nutrition, just in diced squares instead of shredded.

Here is information on your drive-through hash brown potatoes.  McDonald’s Hash Browns are not gluten-free as they contain wheat and milk.

This brand is made with Yukon Gold Potatoes.  USDA Organic and Non-GMO.  Found in the frozen food section of health stores.  There are no preservatives or artificial colors.

Hash browns are not just for breakfast.  These are not gluten-free.  The nutrition information and ingredients are just what’s in the box.  To make the recipe, you would include salt, butter, milk, and ground meat. 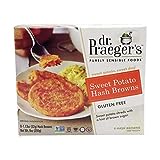 These vegan hash browns are made in a factor that handles gluten.

No, traditional hash browns are not keto-friendly as potatoes have a lot of carbs.  If you are on a keto diet, try making cauliflower hash browns instead.  I don’t see any on the market, but there are plenty of recipes to try.

What type of Oil should I use to fry my Hash Browns?

Often, butter is used, but if you are on a vegan diet, try olive or vegetable oil.  They can also be fried without oil in a non-stick pan.

It depends on your preparation.  If you choose a brand with potatoes and little to no other ingredients and fry them without oil, they are a great side dish.  If you prepare them with Hamburger Helper or with a lot of oils, then not so much.

Kim Burton is a certified Nutrition Coach and freelance writer living in the mountains of Colorado. She believes in a Qualitarian diet and that the path to a healthy lifestyle begins inside of each one of us. After years of struggling with her own health, she found that changing the way she eats and moves made all the difference. She uses what she learns to empower others to think of food as medicine.